A FRENCH KILLER IS HIRED TO DO A JOB AMERICANS COULD NOT DO !!! 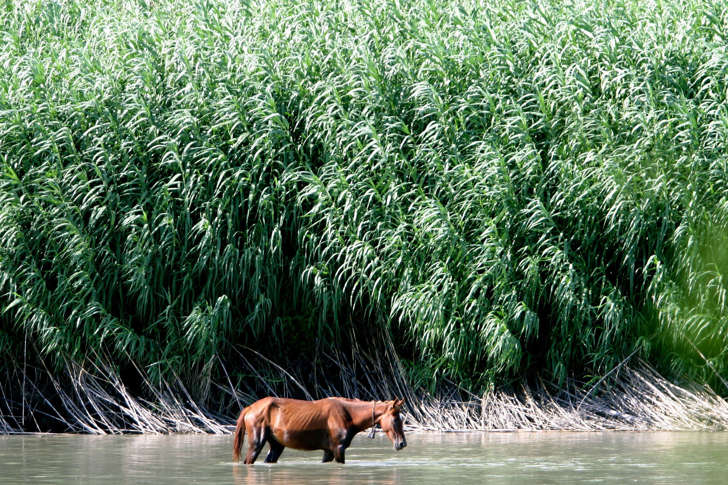 (Bloomberg) -- They’ve burned it, bulldozed it, hacked it and poisoned it. Now they want to try wasps -- imported from France, no less.


The target is carrizo cane, a bamboo-like reed that’s a fearsome enemy of officers patrolling the Texas-Mexico border. Dense stands have camouflaged stash houses, half-ton steers and a caged Bengal tiger someone tried to sneak into the country.

“I’ve heard agents talk about it like it was Sherwood Forest,” said Francis Reilly, an environmental consultant and adviser to the U.S. Border Patrol. “They’d hear screams or gunfire in the cane thickets, and not be able to find anybody when they went in.”

The federal government has spent millions trying to prune the stuff. Now Texas is coming to the rescue -- or is at least trying to -- with Governor Greg Abbott signing a law in May to create a $10 million carrizo-purge program at the State Soil and Water Conservation Board. It turns out there’s nothing in the budget to cover it, though officials are hunting for the funds. They would finance the efforts of John Goolsby, a U.S. Department of Agriculture entomologist who wants to unleash armies of French carrizo-eating wasps along the Rio Grande.

What could possibly go wrong?

The classic example of biological control gone awry is the 1883 introduction of the mongoose to Hawaii to kill off sugar cane-hungry rats. Instead, the pointy-nosed weasels feasted on chickens, endangered sea turtles and the eggs of the state bird.

Kitchen Sink
Goolsby said he’s run thousands of tests and is confident his French wasps will have appetites only for carrizo. “The plant has met its worst enemy,” he said, wearing a straw cowboy hat as he surveyed a bright-green field of reeds.


The war on the cane’s been raging for years along the border. Back in 2008, the U.S. Department of Homeland Security intended to annihilate carrizo with imazapyr, but the plan to spray the herbicide from helicopters didn’t sit well with locals in Laredo, who sued. Protesters, including priests and first- graders, descended on City Hall. The spraying scheme died.

Since then, the feds have thrown the kitchen sink at the stalks. They engaged bulldozers to tear up roots, but that hurt the ecosystem. They set fields on fire, but that made the reed grow back with a vengeance. They sent in crews armed with machetes and tricked-out weed-whackers, but that was just ridiculously time-consuming.

Goolsby had meanwhile tracked down the tiny Arundo wasp -- a bit bigger than a pinhead -- in Montepellier in France.

Water Thief
As it happens, Arundo won’t lay eggs in anything but carrizo. Once the larvae hatch, they act as petite saws, slicing through a plant’s fibers, ultimately stunting its growth.


Since he imported them in 2009, he’s been assessing their prowess at a Rio Grande test site. He recently took a group of professors, conservationists and state officials on a tour of the muddy banks, handing out plastic jars of black Arundos.

“Take the top off and find some cane where those little female wasps can start laying some eggs,” Goolsby instructed. Wasps flew out and within minutes were doing their thing.

They can’t be allowed to be too efficient, because the cane fields’ obliteration would be a bummer for ocelots and jaguarondi, rare cats that enjoy slinking through the stalks.

In fact, carrizo’s hardly universally loathed. Native to the Mediterranean, it lives there peacefully, serving as raw material for baskets, fishing rods and reeds for musical instruments. After sailing with Christopher Columbus, it didn’t stir up trouble in the New World either, until conservationists realized it was sucking up water from the Rio Grande, a faux pas in an era of persistent drought. (There’s a reason Spanish- speakers call it “el ladron de agua,” or the water thief.)

Carrizo didn’t get a target on its back until the border crackdown introduced federal agents to its wiles. Goolsby’s been liberating test batches of Arundo, but could use some of the $10 million for a wide-scale release. One shot should do it, Reilly said. “Next year if they decide they’re broke in Texas or their priorities change, the bugs will keep on working.”

KARIBUNI KUCHANGIA/YOU ARE WELCOME TO CONTRIBUTE